Ephedra Fact and Fiction: How Politics, the Press and Special Interests are Targeting Your Rights to Vitamins, Minerals, and Herbs 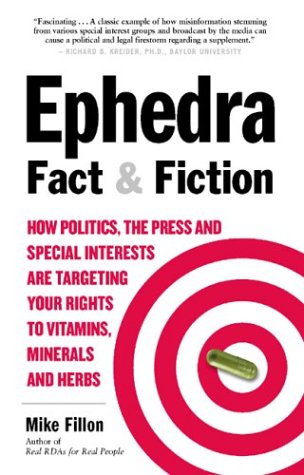 If you have listened to the news or read a newspaper lately, you’ve likely heard something relating to the supposed dangers of ephedra. Maybe that this football player or that baseball player collapsed, had a serious reaction, or even died because of taking an ephedra supplement. That seems to be the consensus – that ephedra can literally kill you.

But is ephedra really a “killer” herb? Does it really cause heart attacks, strokes, seizures, or the other serious effects that are commmonly reported in the media? The answers will likely surprise you.

In Ephedra Fact & Fiction, author Mike Fillon uncovers the realy story behind the ephedra controversy. Investigating every avenue, from behind-the-scene deals between lawmakers and pharmaceutical companies to an unwitting media’s perpetuation of misinformation created by “front” PR firms to the blatant dismissal of legitmate research supporting ephedra’s safety, the book turns the entire ephedra firestorm on its head. More compelling is Fillon’s discovery that this scenario is not simply about ephedra – rather, it is the entire supplement industry, the legislation that governs it and the availability of even the most common nutritional supplement that are the real targets.